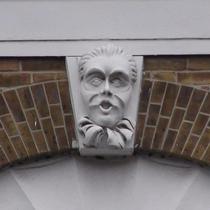 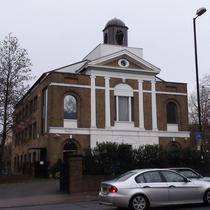 We are immensely proud of having spotted this keystone, from the top of a bus.

Built in 1787 as Pentonville Chapel, in 1847 this church became known as Saint James, Pentonville. The architect, Aaron Hurst, is buried in the vault. For a time it served as the official church of the International Circus Clown's Club and housed the annual service for circus members. The church was declared redundant in May 1978. On the web there are references to it being demolished in 1985 but the front facade at least looks original. It was during the conversion to offices that this extremely unusual keystone was added.  See Ornamental Passions for more information.

This section lists the subjects commemorated on the memorial on this page:
Grimaldi keystone