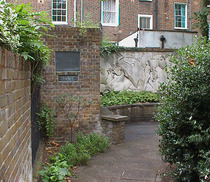 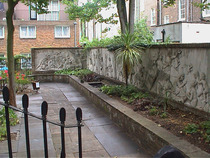 {Inscribed at the left-hand end of the left-most panel:}
M. Watson, Sculpt.

{On the plaques:}
Battishill Gardens
The stone frieze was carved by Musgrave Watson in 1842 and formed part of a Hall of Commerce in Threadneedle Street until it was demolished in 1922. The stonework was salvaged by Sir Albert Richardson and remained in pieces at London University. In 1974 these were given to the Borough Architect who replaced the missing sections to make the frieze a feature in the new Battishill Gardens.
The sculpture is an allegorical composition showing Commerce standing centrally with wings outstretched to welcome all nations. On the left hand side there is a lion and representations of Poetry, Music and Painting; then Enterprise guided by Genius with a group looking towards the Messenger of Peace and Glad Tidings. On the other side of Commerce is Peace and Bearers of Fruits of the Earth; then Navigation guided by Urania and others personifying Geography and Education. To the far right are people of other countries shackled and dejected looking, imploring towards Britannia holding a flag, symbolic of liberty and protection.

{On a separate plaque, beneath:}
These Gardens were opened on 30th June 1975 by Sir John Betjeman, Poet Laureate.

This stone frieze (13 metres long, 2 metres high) was originally unveiled on the Hall of Commerce in 1842.

From this 1914 map and this 1871 map you can see that Battishill Street used to be named Hardinge Street and was lined both sides with Victorian terraced housing probably just like what remains on the east side. Similar housing used to occupy the east side of Napier Terrace. Maps showing WW2 bomb damage show nothing in these streets and post-WW2 aerial photos show all these houses still in place. But they had gone by 1975 when the gardens were opened.

The very useful Mapsthehunthouse indicates that the name change took place 1929-45 and probably 1936-9.

On the day (July 2004) we visited this small paved garden it contained an unusual installation: a single wooden seat with a lectern in front holding a weather-protected page on which was printed "The Drum" an anti-war poem by John Scott (1730 - 83). Both seat and lectern were securely bolted to the ground.

This section lists the subjects commemorated on the memorial on this page:
Battishill Gardens

This section lists the subjects who helped to create/erect the memorial on this page:
Battishill Gardens