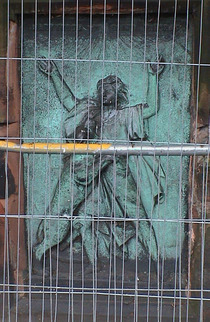 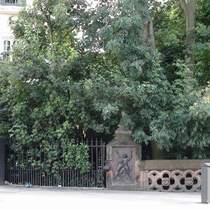 {Along the top:}
Martyrdom of Saint Pancras

{Along the bottom, on the new panel:}
{At left:}
Stuart Smith - Sculpture
Morris Singer - Founders
{At right:}
The gift of William Thornton

There are two identical bronze panels, the other being at the south-west corner of this bridge structure. There used to be an arm of the Regent's Canal that ran under here, leading to the Cumberland Basin serving Cumberland Market, and this was Gloucester Gate Bridge. London Canals gives the details. This street was renovated around 2003-6 and early on in the process we photographed the only one of the two panels that was in situ, behind barriers. In April 2004 we noticed that it too had been removed. Now in 2010 we see that both panels have been replaced with identical modern recreations, one of which we photographed (see picture without barriers). Looking closely at this new panel we notice that St Pancras seems to have changed gender or has been taking breast enhancement tablets. The sculptor's own website partly explains this. Apparently the two panels were damaged and/or stolen and the sculptor had to work from the one and only photograph that the Council could find of the original. The photo must have had a smudge or two in the chest area. Our picture of the sculptor beside one of the panels comes from his website and shows the new panel very well. Compare that with our photo of the original and you can see the mammary differences.

Ornamental Passions has also posted on these works, reporting "The bridge was highly ornate, in sandstone with standard lamps and stone figures. But it suffered brutally over time. The canal basin was filled in, so the bridge looks lost and meaningless. A wartime bomb destroyed all the figures. And a truck hit one of the bronze plaques, which went missing during the repair. The other was also stolen."

The piers at the other two corners of the bridge are occupied by visually dull foundation stones: SE and NW.

This section lists the subjects commemorated on the memorial on this page:
St Pancras at Gloucester Gate Bridge

This section lists the subjects who helped to create/erect the memorial on this page:
St Pancras at Gloucester Gate Bridge

This carving depicts the two Brontë sisters meeting Thackeray, but rather fai...