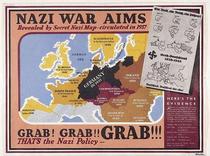 Sorry, we've done no research on WW2, it's just too big a subject. But do visit the picture source web site - it has a fascinating collection of maps.  And we enjoyed these photos of current WW2 evidence in London.  Also for some signs of WW2 on buildings in London see Spitalfields Life.

We believe these were also based in London but we need more information: Denmark’s government;  King Zog of Albania; Emperor Haile Selassie of Abyssinia.