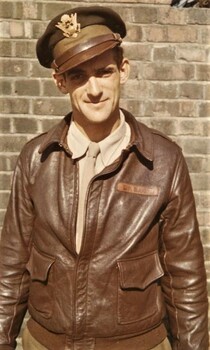 He joined the Royal Air Force and as a Sergeant he was attached to No.121 Eagle Squadron in 1942, initially based at RAF North Weald. Our Picture Source outlines his service career in both the British and American Air Forces.

On 8 August 1944 his skull was fractured when the North American P-51 Mustang aeroplane he was flying was hit by flak on a mission to Norway and his service ended on 29 September 1944 when he retired holding the rank of Lieutenant Colonel. He was awarded the Air Medal, the Distinguished Flying Cross, the European-African-Middle Eastern Campaign Medal, the Purple Heart and the World War II Victory Medal.

In 1947 he married Pattie Annette Warren (1924-2015) and they had at least three children: Wesley M. Blanding, Patricia Blanding & Elizabeth Blanding.

This section lists the memorials where the subject on this page is commemorated:
Leon Blanding