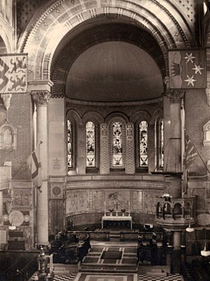 Built by Thomas Henry Wyatt, in the Italianate style. It became a royal garrison church in 1928, following a visit by King George V. It contains many mosaics, particularly one by Antonio Salviati, of St George slaying the dragon. A large part of the building was destroyed in an air-raid, but the ruins are used occasionally for open-air services. In 2011, the Heritage Lottery Fund, awarded a substantial grant for conservation work to be carried out.

This section lists the memorials where the subject on this page is commemorated:
Royal Garrison Church of St George

Born Barnstaple, Devon. Architect, in the arts and crafts style, and writer o...