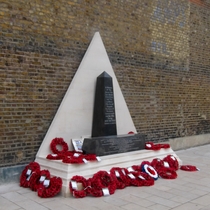 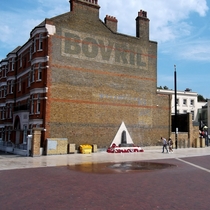 {On the vertical obelisk:}
In memory of the service men and women from Africa and the Caribbean who served alongside the forces of the British Commonwealth and her allies during WWI and WWII.
Remembering the forgotten.

Unveiled on Windrush Day. A very simple design, we think the horizontal obelisk may represent the fallen.

Originally intended to commemorate the centenary of the outbreak of WW1 and the contribution made by Caribbean people; and to be placed at Tilbury Docks (where the Windrush landed). But the remit expanded to include both world wars and those from Africa as well as the Caribbean, so this Brixton location was chosen.

This section lists the subjects commemorated on the memorial on this page:
African and Caribbean Armed Forces

After the outbreak of WWI, black recruits could be found in all branches of t...

This section lists the subjects who helped to create/erect the memorial on this page:
African and Caribbean Armed Forces