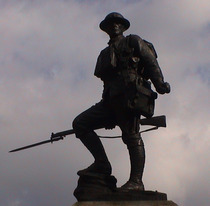 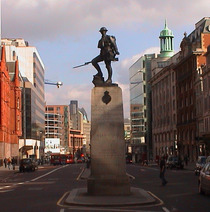 {On the front (western) face of the pillar on which the soldier stands:}
{the regimental symbol in bronze with the motto:}
Honi soit qui mal y pense {Motto in French: Shame on him with evil thoughts.}

{Carved on the stone face:}
The Royal Fusiliers (City of London Regiment)

{and lastly, carved on the chamfered top of the base of the pillar, in much smaller lettering:}
and those fusiliers killed in subsequent campaigns

{On the rear (eastern) face of the pillar is a list of 52 battalions. See Subjects Commemorated for this list.}

{To the right of alternate lines are up to 6 symbols selected from: crown, bunch, rose, sometimes two of each. We have no explanation other than decorative.}

{Inscribed on the base of the statue:}
Albert Toft Sc

Having already identified four (see Rifle Brigade) we are always interested in who modelled for soldiers on war memorials. At Great War Forum, about this statue we read "The same figure was also used on Toft’s bronze sculptures for the Oldham War Memorial and the 41st Division Memorial at Flers. Various internet sources state that Toft modelled the figure on ‘Sgt. Cox, a former Royal Fusilier who had served throughout the Great War’." And it narrows the candidates down to just four men.

This section lists the subjects commemorated on the memorial on this page:
Royal Fusiliers(City of London)

This section lists the subjects who helped to create/erect the memorial on this page:
Royal Fusiliers(City of London)

Albert Arthur Toft was born on 3 June 1862 in Handsworth, Staffordshire, the ...