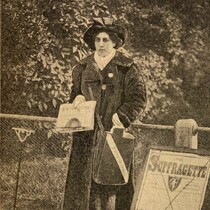 Princess Sophia Alexandrovna Duleep Singh was a prominent suffragette in the UK. Her father was Maharaja Sir Duleep Singh, who had been taken from his kingdom of Punjab to the British Raj, and was subsequently exiled to England. As a child the Maharaja had worn the Koh-i-Noor diamond but as part of the treaty that the East India Company forced him to sign he lost the diamond along with his kingdom.

She was born in Belgravia and lived in Suffolk. 1898 Queen Victoria, her godmother, gave her a grace and favour apartment in Faraday House at Hampton Court. During the early twentieth century, Singh was one of several Indian women who pioneered the cause of women's rights in Britain. Although she is best remembered for her leading role in the Women's Tax Resistance League, she also participated in other women's suffrage groups, including the Women's Social and Political Union.

The photograph shows her selling ‘The Suffragette’ newspaper outside Hampton Court in April 1913. She died in in Penn, Buckinghamshire.

This section lists the memorials where the subject on this page is commemorated:
Sophia Duleep Singh