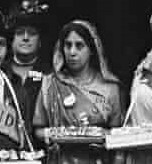 Also known as Mrs. P. L. Roy. Indian social reformer and suffragist who played an active role in the social life of Indians in London, as well as in campaigns for women's suffrage in Britain and India. She was described in The Vote in 1911 as 'one of the most emancipated of Indian women'. President of the London Indian Union from 1908.

From our picture source: "from Calcutta and was married to Piera Lal Roy who was an Indian barrister, and the couple had six children. She became president of the London Indian Union Society in 1910 and begun playing an influential role in the Indian section of the female suffrage movement. The Roy’s relocated to London where Mrs Roy was quite actively involved in the British suffrage movement and for the empowerment of Indian women. ... She was a member of the ‘Eastern League’, set up by both Indian and British women to raise money for the Indian Soldiers’ Fund."

This section lists the memorials where the subject on this page is commemorated:
Lolita Roy

Park and Ernest Boulton were 'Fanny and Stella', the celebrated Victorian cro...