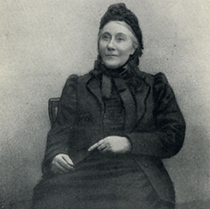 Chairperson of the North of England Society for Women’s Suffrage. Manchester’...