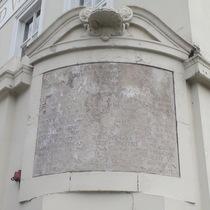 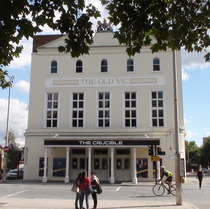 Emma Cons
Founder of the Vic
Alderman of the first London County Council
Born 1837 Died 1912
Lover of beauty, and pupil of Ruskin, she yet gave up the life of an artist for social work, so deeply did she sympathise with those who lack many of the good things of life. To improve housing for working men and women, to provide wholesome and joyous recreation at a low price, to promote education, to protect infant life, and to bring a human touch to the children in the industrial schools of her day. To such beneficent ends she gave her very self. Large-hearted and clear-sighted, courageous, tenacious of purpose and of great personal modesty, her selfless appeal drew out the best in others and was a constant inspiration for service to all with whom she was associated.

Our thanks to our deciphering-of-difficult-to-read-inscriptions consultant, John Hartley, without whom we would be reporting that Emma Cons' "... seamless arse brought out the best in others ..." (which is certainly more interesting than John's version).

Since publishing this memorial Tom Long has sent us "The Stage" of 7th November 1929 which reports on “The Old Vic - unveiling of Cons Memorial by the Duchess of York”. This article contains a transcription of the text so we have been able to fill in the few gaps left despite John's best efforts.

There we also learn that the memorial was in 3 parts: this plaque; a bronze bust of Miss Cons, by Sir William Goscombe John, in the vestibule; and shelters for those waiting to enter the pit and gallery.

The unveiling was apparently ‘long-delayed’ - perhaps the intention had been to commemorate 90 years since Cons' birth in March 1838. But since the plaque incorrectly gives her DOB as 1837 they would have thought they were two years late, not just one.

Unveiled by the Duchess of York, the lady who was much later known as Queen Elizabeth the Queen Mother.

This section lists the subjects commemorated on the memorial on this page:
Emma Cons - Old Vic

This theatre designed by the German architect Rudolphe Cabanel, began life in...

This section lists the subjects who helped to create/erect the memorial on this page:
Emma Cons - Old Vic

This section lists the other memorials at the same location as the memorial on this page:
Emma Cons - Old Vic