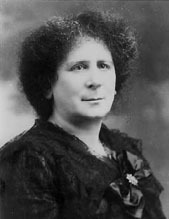 Electrical engineer and suffragist. Born Phoebe Sarah Marks in Portsmouth. Aged 16 began teaching in London. Studied maths at Girton College Cambridge. Married William Ayrton in 1885. Elected a member of the Institution of Electrical Engineers in 1899 and was the only woman member until 1958 (shame on them). In 1902 she was proposed for the Royal Society but this was blocked because a married woman had no standing in law and so was ineligible. Not surprisingly Hertha supported the militant suffragists and marched in all the suffrage protests, in academic gown, which, of course, she was not entitled to wear. Mrs Pankhurst and other hunger strikers were nursed in her home and Hertha declared herself "proud" when her daughter Barbara was imprisoned. Barbara went on to become an MP and to produce Michael Ayrton, the artist. Hertha died in Sussex.

This section lists the memorials where the subject on this page is commemorated:
Hertha Ayrton

Education reformer and leader of Jewish League for Woman Suffrage. She champi...