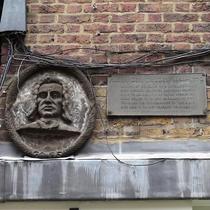 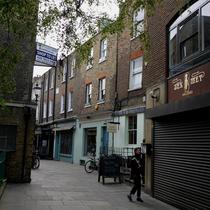 {On the portrait plaque, beside the bust:}
1961 Payton

Camden Passage (link now dead) had a picture of the unveiling by Poet Laureate Betjeman and church dignitaries.

2015: For their excellent post on Cruden London Details did some digging and raise a question about the origin of the description of Cruden: “whom neither infirmity nor neglect could debase”.   The phrase appears in an 1811 book by John Nelson “History, Topography, and Antiquities of the Parish of St. Mary Islington in the County of Middlesex”.  However its source is usually given as Alexander Chalmers’ introduction to Cruden’s Concordance.  The phrase does appear there, but not in any editions earlier than 1811, which rather suggests that Chalmers ‘borrowed’ it from Nelson.    This work by London Details also enabled us to correctly identify “Nelson”; previously we had only managed to guess, incorrectly, that he was Thomas Nelson, a religious publisher.

This section lists the subjects commemorated on the memorial on this page:
Alexander Cruden

This section lists the subjects who helped to create/erect the memorial on this page:
Alexander Cruden

Royal Air Force (Egypt) Memorial gives a report of the laying of this stone.