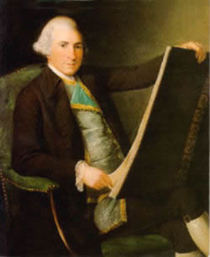 Born in Kirkcaldy, Fifeshire, Scotland.
Died 13 Albemarle Street and is buried in Westminster Abbey.
Robert is the most celebrated of the four Adam brothers, who together designed classical buildings.

2016: Visiting the ‘Robert Adam's London’ exhibition at The Soane Museum we learnt some details about Adam’s London life: He lived in London for 34 years. On his return from the Grand Tour, in 1758 or shortly after, he did not return to Scotland but to London where he set up his office. He borrowed money from brother John to acquire the lease of 75 Lower Grosvenor Street which, after one month in rented accommodation, is where he settled for nearly 14 years. He then spent another 14 years living within his own complex at the Adelphi, 4 Royal Terrace. His lived his last 6 years in a small house on Albemarle Street.

This section lists the memorials where the subject on this page is commemorated:
Robert Adam

House of Royal Soc. for Encouragement of Arts etc

The House of Royal Soc. for Encouragement of Arts Manufactures and Commerce. ...