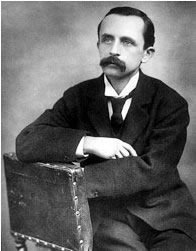 Playwright and novelist. Born Kirriemuir, Scotland. Moved to London, Bloomsbury, in 1885 for his writing career. Less than 5 foot tall he was not very successful with women and developed a habit of befriending the families of married friends, playing with their children, and on one occasion developing a close friendship with the wife, Sylvia Llewelyn Davies, the mother of the four boys (living at 31 Kensington Park Gardens) on whom it is said the "Lost Boys" in Peter Pan are based. His marriage in 1891 was unsuccessful and during the divorce proceedings in 1909 his impotence became public knowledge. Within 4 years of each other the Llewelyn Davies parents died, leaving Barrie in 1910 as the guardian of their boys.

In 1913 his close friend, the explorer Robert Scott, wrote to him from the South Pole, knowing he was dying and asking him to look after his wife, Lady Scott, and their child. Lady Scott did not require his protection but Barrie looked after the Davies boys as if they were his own sons. Wrote Peter Pan in 1904, initially as a play, and gave the copyright to Great Ormond Street Children's Hospital in April 1929.

When given the freedom of Dumfries Barrie said that Peter Pan's adventures had been inspired by his childhood games in the house and garden of Moat Brae House in Dumfries where he played with the sons of the owner. Presented the first Peter Pan Cup, competed for by the members of the Serpentine Swimming Club on Christmas morning. Londonist has more info.

Barrie founded the Allahakbarries, who played village cricket almost every summer from 1887 until the eve of WW1, 26 years. The team included: Barrie himself, Conan Doyle, Jerome K. Jerome, A. A. Milne, P. G. Wodehouse and many other writers and artists. Barrie didn't just arrange the matches, he ran the team, properly, with club colours, dinners and memorial booklets. Quality Street chocolates were named after one of his plays, and many were filmed, e.g. The Admirable Crichton, 1957. He bacame ill at his home, 3 Adelphi Terrace, and died at a nursing home at 57 Manchester Street, Marylebone.

And the Llewelyn Davies boys? George died in the trenches in 1915; Michael (the source of that line: "To die would be an awfully big adventure") drowned at Oxford aged 21 clasping another undergraduate; Peter, threw himself under a train at Sloane Square in 1960, apparently sick of his association with "that terrible masterpiece".

2019: People report on a house for sale in "South Kensington" where Barrie lived  "1895-1902" and provides photos inside and out. The house is 133 Gloucester Road, on the section that forms the east side of Hereford Square.

This section lists the memorials where the subject on this page is commemorated:
Sir J. M. Barrie

This section lists the memorials created by the subject on this page:
Sir J. M. Barrie

The first Peter Pan, Nina Boucicault, (always a woman) modelled for the statu...