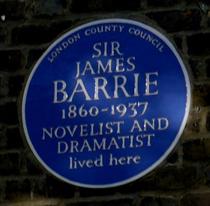 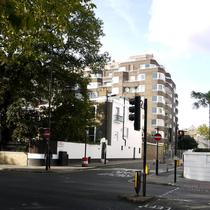 Barrie and his wife Mary Ansell lived at Gloucester Road, 1895 - 1904, when they moved here, where they stayed until their divorce in 1909. Elsewhere we've read that they moved from their Gloucester Road house to another house in Leinster Gardens, Bayswater, in 1901.

May 2015: The house is for sale for £7million and The Mail has photos of the inside, and says: "Leinster Corner was built in 1820 as half of one of four pairs of semi-detached, double fronted villas, and is part of the only surviving pair. J. M. Barrie ... penned Peter Pan there in 1904."

2016: The Guardian has a terrific article written by Louisa Young who grew up in this house.

This section lists the subjects commemorated on the memorial on this page:
J. M. Barrie - W2

This section lists the subjects who helped to create/erect the memorial on this page:
J. M. Barrie - W2