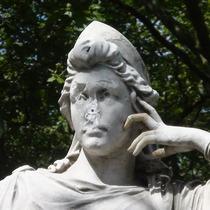 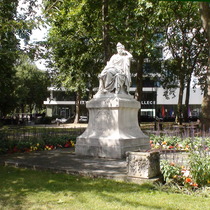 Oh dear, the poor girl needs to spend some more time in make-up. The pose is inspired by Reynolds' 1784 painting 'Mrs Siddons as the Tragic Muse' - see our image.

Unveiled by Sir Henry Irving who pointed out that, unless you count Shakespeare, this is the first statue of an actor erected in London.  Mrs Siddons lived at Westbourne Green 1805 - 1817 (a little further along the Westway, towards the west) and is buried in nearby St Mary’s Churchyard.

2019: Londonist reports that her nose is back in situ and she has been returned to her former glory.

We’ve transcribed the Green’s modern information board because it is interesting.  But first note that it says Emma Hamilton “grew up” in Greville’s house here.  Other reputable sources describe Emma’s relations with Greville quite differently:  she came to his house as his mistress and when he grew tired of her he effectively sold her to Hamilton, his uncle, in return for becoming his heir.  Nice.  Here’s the text:

Although Paddington Green is first mentioned only in 1549 it is probably very much older than this.  At that time it was an area of open waste or common land where villagers could gather fuel and graze their animals.
Throughout the 17th and 18th centuries it was reduced in size as cottages and some larger gentlemen’s houses were built.  One such gentleman was the Hon. Charles Greville (1749 – 1809), a Lord of the Admiralty and a founder of the Royal Horticultural Society.  Emma Hart, later Lady Hamilton, grew up in his house and here she met Greville’s uncle Sir William Hamilton, Ambassador at Naples.
It was during this period that parts of the green were fenced off and placed in the hands of a trust to preserve them for the benefit of the parish.  St Mary’s Church was built in 1788 – 1791, the Paddington branch of the Grand Junction canal opened in 1801 and development of the area soon followed.  These changes effectively reduced the green to its present size.
George Shillibeer’s first London bus ran from Paddington Green to the Bank of England in 1829.
In 1864 Marion Mayne left £35 a year for the maintenance of the green and in 1865 it was opened as a public park.  In the 1860s and 1870s the green was well known for the song “Polly Perkins of Paddington Green” written and sung by Harry Clifton in 1863, and for England’s first famous private detective, Ignatius Paul Pollacky, whose office was at no. 13 Paddington Green from 1865 to 1882.  The Children’s Hospital was established from 1883 and rebuilt in 1894 – 1895.
The statue of Sarah Siddons (1755 – 1831) as a tragic muse by Leon-Joseph Chavailliaud was unveiled by Sir Henry Irving in 1897.  Mrs Siddons, a famous actress, lived at Westbourne Green from 1805 to 1817 and is buried in St Mary’s Churchyard.
The prominent concrete block in the centre of the green is the remains of the Civil Defence Report and Control Centre opened in 1953 during the early days of the cold war.
Later development near the green includes Paddington Technical College built in 1967, the flyover opened in 1970 and Hall Place completed in 1973.  Hall Place was named after the Hall family who owned much of the land around the green.

This section lists the subjects commemorated on the memorial on this page:
Sarah Siddons statue

This section lists the subjects who helped to create/erect the memorial on this page:
Sarah Siddons statue

Sculptor.  Born Reims France.  Came to Britain in 1890s and stayed for fiftee...

Actor-manager. Born in Keinton-Mandeville, Somerset. Brought up in near pover...