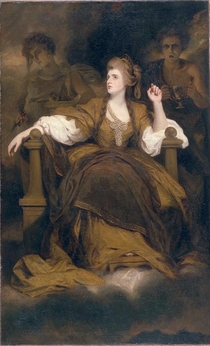 Actress. Born Brecon, Wales, eldest sister of Charles Kemble. 1773 married the actor William Siddons. Came to London in 1782 and was renowned for her Shakespearean roles. Died at home at 27 Upper Baker Street, the section north of Marylebone Road. 5,000 mourners at her funeral.

In the 1950 film 'All about Eve', in which Bette Davis plays a self-obsessed, ageing actress, the plot includes the award of a statuette for 'Distinguished Achievement in Theatre'. This statuette is based on the Reynolds' portrait of Siddons, shown here, 'Mrs Siddons as the Tragic Muse', as is the Paddington Green statue. The excellent Art of Film has freeze frames from the film showing the statuette so you can compare it with the statue, and both with the painting.

Another filmic connection is the Gainsborough Film Studios logo which was based on the 1785 portrait of Siddons by Thomas Gainsborough.

And the Siddons statue was based on the Joshua Reynolds 1784 painting 'Mrs Siddons as the Tragic Muse'.

This section lists the memorials where the subject on this page is commemorated:
Sarah Siddons

Oh dear, the poor girl needs to spend some more time in make-up. The pose is ...