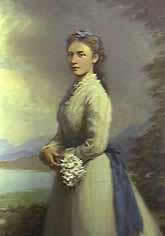 Duchess. Born in Wartburg Castle, near Eisenach in Thuringia, Germany. She ma...