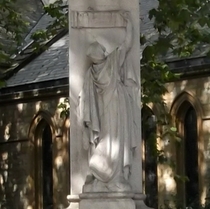 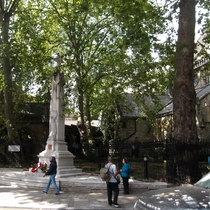 {Below the former Metropolitan Borough of Kensington coat of arms:}
Quid Nobis Ardui {Latin approximately translates as 'nothing is too hard for us'}

{On front of plinth:}
In memory of the men of Kensington and those men serving in Kensington battalions who gave their lives for king and country in the Great War 1914-1918.
1939-1945.

The monument was designed by Hubert C. Corlette and the figure sculpted by Frederick W. Pomeroy. Unveiled by Princess Louise at Kensington Barracks. Moved here when the barracks were demolished in 1972 (replaced by Lancer Square).

This section lists the subjects commemorated on the memorial on this page:
Kensington War Memorial

Men of Kensington and those men serving in Kensington battalions who gave the...

This section lists the subjects who helped to create/erect the memorial on this page:
Kensington War Memorial

Born London. His London includes the 1906 Lady Justice on the dome of the Old...

This section lists the other memorials at the same location as the memorial on this page:
Kensington War Memorial

The plaque is on the pavement to the left of the war memorial.  More informat...

Through the gates you can see that most of the names are nicely picked out bu...