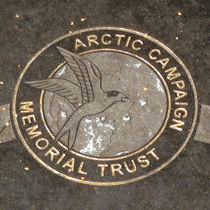 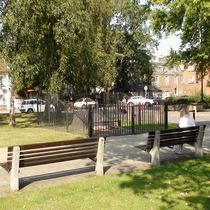 A gift to the people of Enfield from surviving Arctic veterans.

Remembering thousands of brave young men and women who gave their lives in the Arctic Campaign 1941 - 45 on convoys to and from Russia.
We will remember them

Royal Navy protected convoys, delivered thousands of tons of food, oil, guns, tanks, trucks, clothing, aircraft, ships and ammunition, to help the Russians to resist the German forces, a high price was paid, scores of ships sunk, thousands of tons of supplies lost, five million pounds worth of gold sunk with ‘HMS Edinburgh’. Thousands lost their lives; many suffered to this day, from effects of frost bite, severe injuries and exposure, many more thousands were traumatized for life. All this effort to win the freedom we take from granted today.

Unveiled 16.11.2003 in the presence of Excellency Grigory Karasin Russian Ambassador to Great Britain.

This memorial is one of many and marks the 60th anniversary of the end of the Second World War.

{On a plaque erected to the side (north) of the monument:}
70th anniversary marking the end of the Arctic Convoy 1941 - 1945.
Former Mayor, the late Cllr Stanley Carter, a member of the Arctic Convoy, arranged this memorial for the people of Enfield.
It was unveiled by former mayor, Cllr Anne-Marie Pearce in 2003.
Unveiled 14 November 2015 by Mayor, Cllr Patricia Ekechi

Our image shows a close-up of the logo on the memorial. We think that the bird (a swallow?) used to be flying in front of an enamelled blue background, sadly now largely lost.

We are not aware of any special connection between Enfield and the Arctic Convoys.  It seems that this memorial is here because the mayor of Enfield in 1998-9 was a veteran of the campaign.

The original memorial was erected in 2003 and consists of the main plaque with the bird and, below that, the long plaque. This was arranged by Stanley Carter, the ex-mayor, and unveiled by Anne-Marie Pearce, to commemorate the 60th anniversary of the end of WW2 (two years early).

In 2015 the plaque at the side was added. This was unveiled by Patricia Ekechi, to commemorate the 70th anniversary of the end of the Arctic Convoy, and also to provide some information about the creation of the original memorial.

The bench with the Silver Jubilee plaque is just outside our photo, to the left, south.

This section lists the subjects commemorated on the memorial on this page:
WW2 Arctic Convoys memorial

men and women killed in the WW2 Arctic Convoys

Joseph Vissarionovich Stalin was a Georgian revolutionary and the ruler of th...

This section lists the subjects who helped to create/erect the memorial on this page:
WW2 Arctic Convoys memorial

Grigory Borisovich Karasin was born on 23 August 1949 in Moscow, Russia and w...

This section lists the other memorials at the same location as the memorial on this page:
WW2 Arctic Convoys memorial

We don't normally collect benches but large, unusual plaques like this one ar...

The "Give thanks" phrase does not appear to be a quotation, as we first thoug...