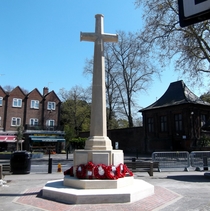 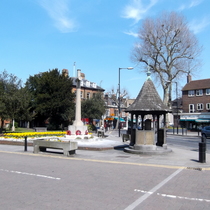 {The 8 panels around the base of this memorial, numbered anti-clockwise, are inscribed as follows:

Panel 1:}
To the glorious memory of the men of Charlton who, in the great wars 1914 and 1939, gave their lives that we might live. Their names are recorded in the book of remembrance in St Luke's Church.

{For all the names see Subjects commemorated.}

The lists(totalling 248 names) are all in alphabetical sequence except for the last 21 in the Army list. We note this because it indicates that the names were added late which to us suggests administrative error or a late notification of death – both sad reasons.

The stones below panels 7 and 8 give the years of birth and death for each name, confirming that these 3 servicemen were lost in WW2. The only other change necessary to this memorial, post-WW2, was the insertion of the text “, in the great wars 1914 and 1939,” into the first panel, either by a clever mason, or by the replacement of the whole panel.

We note that with 245 dead in WW1 Charlton suffered only 3 losses in WW2. This is confirmed by the Imperial War Museum page - surprising but we have no explanation.

This section lists the subjects commemorated on the memorial on this page:
Charlton war memorial

Mentioned as early as 1077, the present church was built with funds left by C...

Servicemen of Charlton lost in WW1 and WW2

This section lists the other memorials at the same location as the memorial on this page:
Charlton war memorial