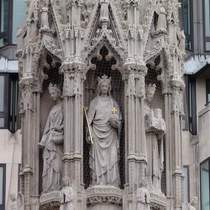 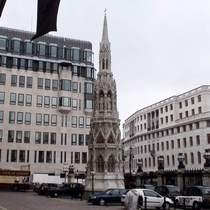 {On the street frontage between some of the double piers there are two identical plaques. They are visually very dull so we have not photographed them, but here's the text:}

The Charing Cross monument is modelled on an early medieval commemorative cross erected by King Edward I for his queen, Eleanor of Castile (1246 – 90).  Twelve crosses marked the journey of her funeral cortege from Harby near Lincoln where she died, to this last stop before Westminster Abbey where she is buried.  A cross was built at every place where the procession rested overnight.

The original cross, from which all distances from London were once measured, was probably at the top of Whitehall and was demolished in 1647.  In 1863 the new Charing Cross monument was built here as a meeting place for Charing Cross Station.  It was designed by E. M. Barry (the architect of the hotel behind) and carved by T. Earp.  Barry also designed giant stone piers and railings to the forecourt which were removed in 1958 to widen the Strand.

Around the monument are 8 standing, crowned statues of Eleanor. This is a recreation of one of 12 Eleanor Crosses erected by King Edward I when his wife Queen Eleanor of Castile died in 1290. "Charing" possibly comes from "Chere reine" French for Dear Queen. The original cross was 'created by' Edward I. The current cross was 'created by' Barry and Earp.

After 5 years behind scaffolding undergoing restoration this monument was put on show again in August 2010.

On the Northern Line platforms in the nearby Charing Cross tube station there are some very striking murals by David Gentleman which show the medieval workers building the original cross.  Diamond Geezer has a good post on these.

This section lists the subjects commemorated on the memorial on this page:
Charing Cross

Born to the King of Castile she was aged 13 when she married the future King ...

This section lists the subjects who helped to create/erect the memorial on this page:
Charing Cross

{On the central pillar:}The heroic dead {followed by 53 names listed over 3 ...