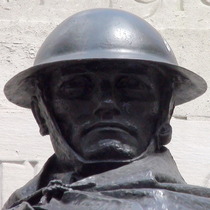 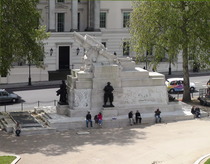 {On the north stone face, above the horizontal figure:}
1914 - 1919
{and around the stone platform on which the figure lies:}
Here was a royal fellowship of death {from Shakespeare's Henry V}
{and on a stone below the figure:}
Beneath this stone is buried the roll of honour of those whose memory is perpetuated by this memorial. they will return never more but their glory will abide for ever.

{On both the west and east stone flank:}
In proud remembrance of the forty nine thousand & seventy six of all ranks of the Royal Regiment of Artillery who gave their lives for King and country in the Great War, 1914 - 1919.
{Running around the whole stone monument, twice, behind the three standing figures, at their head height:}
Mesopotamia Dardanelles Macedonia Arabia India Russia Palestine Central Asia Persia Africa Egypt France Flanders Italy

{At the south end 3 large horizontal bronze panels were added for WW2, from left to right:}

This panel was added to commemorate the 29,924 of all ranks of the royal artillery who gave their lives for their King and country in all parts of the world during the war of 1939 – 1945.  They died with the faith that the future of all mankind would benefit by their sacrifice.

{The horizontal figure, and, we'd expect, the other two, is inscrbed on its right side:}
C. Sargeant Jagger Sc.

{In the ground, to the south of the monument is a small stone plaque:}
The Royal Artillery Memorial was conserved in 2011 with generous support from the Bulldog Trust. English Heritage

The gun on top of the monument is a BL 9.2 inch Howitzer Mk I, carved in stone, which makes it surreal and all the more powerful. On the two sides are stone reliefs depicting war. The three WW2 horizontal bronze panels, by Darcy Braddell, were unveiled by the then Princess Elizabeth and we thank Jamie Davis for finding this link to the British Pathe news film of the unveiling on 29 May 1949, exactly 9 years after Dunkirk. Jamie has also found the British Pathe film of the original unveiling.

2017: Londonist has identified the model for the soldiers: Stanley Rothwell.

Royal Artillery Memorial has some splendid photos and other stuff about this monument. One of the 4 bronze figures represents a dead soldier, which was shocking at the time and the memorial was not well-received.  Now we can see that this is a superior monument by a very experienced sculptor who knew how to do a war memorial. It displays a complex arrangement of planes which provides an interesting base to support the statuary and inscriptions.

This section lists the subjects commemorated on the memorial on this page:
Royal Artillery Monument

members of the Royal Artillery who died in WW1

49,076 of all ranks of the Royal Regiment of Artillery died in WW1.

members of the Royal Artillery who died in WW2

This section lists the subjects who helped to create/erect the memorial on this page:
Royal Artillery Monument