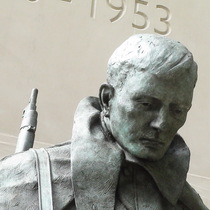 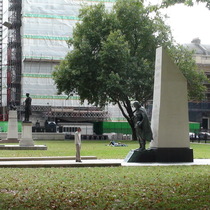 {On the front of the pier:}
The Korean War - 1950-1953
{Below this text the pier is inscribed with a low relief image of Korean mountains, in front of which stands the soldier. Below his feet, in Korean and English:}
With gratitude for the sacrifices made by the British armed forces in defence of freedom and democracy in the Republic of Korea.

{On the north face of the pier, below the UN symbol:}
United Nations
The Korean War was the first UN action against aggression. The UN forces that fought the North Korean invasion were drawn from 21 countries. Although exhausted and impoverished after the Second World War, Britain responded immediately by providing strong naval, army and air forces and became the second largest contributor after the United States. A distant obligation honourable discharged.

{On the back face of the pier: reliefs showing the Korean flag and the outline of the whole country.}

{On the south face of the pier, below the Union Jack:}
British Forces
In this fierce and brutal conflict those who fought included many second world war veterans reinforced by reservists and young national servicemen. The land battle was fought against numerically superior Communist forces. The terrain was mountainous and the weather extreme. 81,084 British servicemen served in the theatre of operations. 1,106 were killed in action. Thousands were wounded and 1,060 suffered as prisoners of war.

The phrase"distant obligation..." references a cabinet meeting on 25 June 1950 at which, in the context of British involvement, Korea was described as "rather a distant obligation" to which PM Attlee replied "but nonetheless an obligation."

This section lists the subjects commemorated on the memorial on this page:
Korean War memorial

This war, the first UN action against aggression, has not officially ended bu...

This section lists the subjects who helped to create/erect the memorial on this page:
Korean War memorial

Vice Minister of Patriots &amp; Veterans Affairs of the Republic of Korea in ...