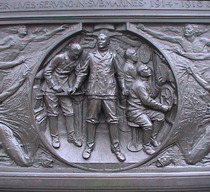 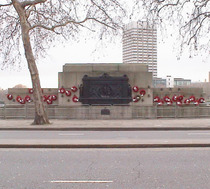 {There are two large plaques, one on each side, listing the 132 lost submarines - WW1 on the left and WW2 on the right}

The surrounding wall is studded with 3-D anchors, perhaps 30 altogether.

The bronze relief depicts, in cross section, the interior of a submarine in which sailors carry out their work in cramped conditions. On either side, sea creatures in human form surround the vessel with nets and seaweed. Below this is shown a submarine on the surface. There is a female form on either side of the central plaque depicting, on the left, Truth and on the right, Justice.

On our first visit we were puzzled by the array of bronze anchors surrounding the central plaque. On our subsequent visit, not long after Remembrance Sunday, their function became clear, see photograph.

This section lists the subjects commemorated on the memorial on this page:
National Submarine War Memorial

The British Navy is known as the Senior Service because it is the oldest of t...

This section lists the subjects who helped to create/erect the memorial on this page:
National Submarine War Memorial

This section lists the other memorials at the same location as the memorial on this page:
National Submarine War Memorial

{Below the main plaque there is a small one, surmounted with two dolphins, a ...

Shame about the nose. On the platform at the unveiling ceremony Brock was mad...