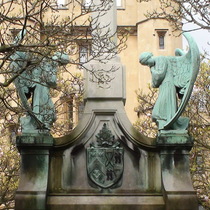 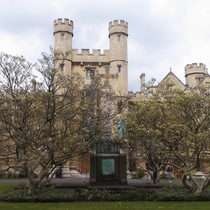 {Large bronze plaque on the north face of the plinth:}
In this place Randall Thomas Davidson completed 25 years as Archbishop of Canterbury and Primate of all England, 1928.
This cross is set here by a multitude of friends, 1931.

{Large bronze plaque on the south face of the plinth:}
1878 - 1928 Here Randall Thomas Davidson celebrated his golden wedding with Edith Tait, whose home was Lambeth.

{Carved in stone, at the base of the cross (visible in our photo) a monogram with the letters:}
IHS

Erected the year after Davidson's death, about 18 months after his resignation as Archbishop. He was the first Archbishop to resign rather than die in office, and chose to do so on his golden wedding anniversary.

When we published we had misread the monogram as 'HHS' and wrote: "Are we being dim, or showing our lack of religiosity, but we can't work out the monogram: SHH? HSH? HHS? what does it stand for?" Pretty quickly both Andrew Behan and Nigel Hulbert pointed out that it is actually the Christogram ‘IHS’’ or the name of Jesus. Andrew even directed us, very politely, to another of our own pages (Church Cross – Teddington), where we’d had the same problem, also solved by kind visitors, some years ago. We think we’ve got it now.

This is in the courtyard of Lambeth Palace, the official London residence of the Archbishop of Canterbury.

This section lists the subjects commemorated on the memorial on this page:
Randall Thomas Davidson - Lambeth Palace