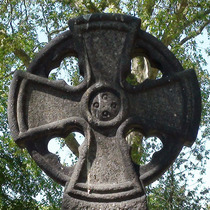 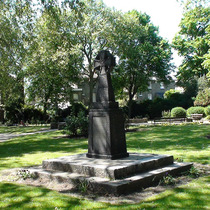 [On the southern face:}
They whom this memorial commemorates, and whose names are recorded on the war shrine now resting in Holy Trinity Church, were numbered among those who, at the call of king & country, left all that was dear to them, endured hardness, faced danger, and finally passed out of sight of men by the path of duty and self-sacrifice, giving up their own lives that others might live in freedom.

Let those who come after see to it that their names are not forgotten.

[On the northern face:}
Lest we forget

The inscription "at call of king . . . Live in freedom" comes from a letter sent by King George V to every bereaved family. The Holy Trinity Church mentioned in the inscription is in nearby Cloudesley Square.

The correspondence made available by the Cloudesley Association also gives us the name of the firm that created the granite memorial, and that the contract for this work was being discussed in October 1919.

The Cloudesley Association have a photograph of the 'war shrine' (which is still) in the church and they have transcribed the 55 names. They also give access to some correspondence carried on by the Vicar Rees-Jones, as Chairman of The War Shrine Committee. Here we learn that during the war the Shrine had been in "Thornhill Gardens" and that Rees-Jones organised a ceremonial procession on 1 February 1920 (to be "the grandest Barnsbury has ever known") to transfer the Shrine from there to the church in Cloudesley Square.

Rees-Jones also arranged that "an enduring Memorial of Granite should be erected in the Gardens on the spot hallowed during the War by the Shrine, and now looked upon by many as the only-known resting place of the dear ones they have lost." Since the granite memorial is in what we now call Thornhill Road Garden we assume that that is where the shrine had been (and not in what we now know as Thornhill Square Gardens).

In some sense the granite memorial is commemorating the War Shrine itself as well as those killed in the war.  The reference to "the only-known resting place" is a recognition of the 1915 decision not to bring home the bodies of the dead.

In a letter exhorting the returned soldiers to attend the procession, Rees-Jones writes "While you were away in the Great War the people of Barnsbury gathered round the War Shrine in their tens of thousands and if you could have heard the three cheers that we gave for “Our Lads” I think that you would have jumped at the chance of doing a bit for the dear old shrine when you came home. We kept our Demonstrations in wet and cold but nothing held us back and your Mothers, Wives, Sweethearts came in their hundreds to remember their Lads."

Given the inscription on this granite memorial the Cloudesley Association understandably assume that the War Shrine referred to in this correspondence is the attractive carved wooden memorial containing a list of 55 names, now in the church. But there are two reasons for doubting this.

The Shrine had been in the garden during the war so it could not have had inscribed upon it the names of the men who had not yet died, listed alphabetically, and it would have been morbidly odd had it contained a blank section ready for the names of the dead. Also, the physical structure of the ornate wooden memorial would not have survived any time out in the open. It is designed to be attached to a wall, not to be a free-standing, three-dimensional monument around which people gathered.

This correspondence provides the first reference we have ever come across to a War Shrine being in existence during the war. We wish we knew more about it. At the time most community activities were organised by, and centred on, the church so it seems odd that the Shrine was erected in Thornhill Road Garden and not in the garden at the church.  We imagine it may have been in the form of a plain Christian cross and constructed in wood.

Perhaps when the War Shrine was taken into the church it became apparent that it was too badly weathered to be suitable for the list of names. And so it was set aside and a new memorial created, the one which now hangs in the church. If so, one wonders what happened to the original War Shrine. Does it now lie somewhere in the church, lost and forgotten, unrecognised for what it is? We will contact the people at the church to research further.

This section lists the subjects commemorated on the memorial on this page:
War memorial - Islington Holy Trinity

This section lists the subjects who helped to create/erect the memorial on this page:
War memorial - Islington Holy Trinity