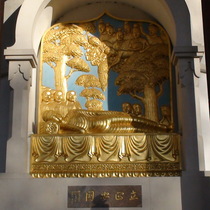 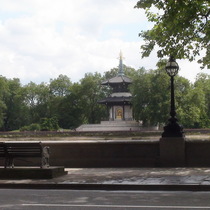 Between 1947 and 2000 eighty peace pagodas were built around the world by the Nipponzan Myohoji Japanese Buddist movement, led by Nichidatsu Fujii (1885–1985). Initially inspired by Mahatma Gandhi, he was motivated by the WW2 atomic bombs to build these monuments to inspire world peace.

A nearby information board informs:
The London Peace Pagoda was built by monks, nuns and followers of Nipponzan Myohoji at the behest of our founder and preceptor, the Most Venerable Nichidatsu Fujii (known as 'Fujii Guruji' by Mahatma Gandhi) who passed away in January 1985 at the age of 100 years. The inaugural ceremony took place on 14th May 1985. The Pagoda is dedicated to the realisation of Universal Peace. ... Pagodas have a history that stretches back 2,500 years when the sacred relics of Lord Buddha were first enshrined to be revered as his eternal presence. ... The annual celebration of the Peace pagoda takes place in mid June and there is a Nagasaki Day commemoration Floating Lantern Cermemony which take splace on 9th August each year.
Nipponzan Myohoji
London Dojo

Our photo is taken from the north side of the river.

This section lists the subjects commemorated on the memorial on this page:
Peace Pagoda

There are several names at the bottom of the memorial which are not in alphab...