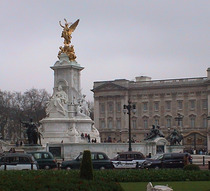 {To the side of steps leading to the central statue:}
This memorial was designed and executed by Thomas Brock RA Sculptor

{On the plinth below the Queen herself:}
Victoria
Regina Imperatrix

Shame about the nose. On the platform at the unveiling ceremony Brock was made Knight Commander of the Bath.

Subscriptions for the erection of this monument were sought, especially from the colonies. These funds paid not just for the monument but also to turn the Mall into a royal processional route, the erection of Admiralty Arch and the re-facing of Buckingham Palace. The architect chosen for the whole project was Aston Webb. He must have visited Brussels at about this time since Admiralty Arch is partly modelled on the monumental arch in Park Cinquantenaire and Buckingham Palace is partly modelled on the Royal Palace in Brussels which was also being refaced. The palace had to be completed in 3 months while the royals were on their summer holiday at Sandringham (just like a modern TV make-over). Some pillars around the monument are named for the colonies while Canada got the splendid gates into Green Park. There is a story that when items were being allocated New Zealand got forgotten and it was only much later, when someone noticed, that a lion on the monument was inscribed for New Zealand. We thank Jamie Davis for finding this link to the British Pathe news film of the unveiling.

This section lists the subjects commemorated on the memorial on this page:
Queen Victoria Memorial

This section lists the subjects who helped to create/erect the memorial on this page:
Queen Victoria Memorial

{On the front face:} In memory of our glorious dead. {On a stone panel on the...