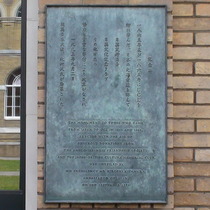 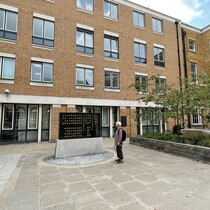 {On the plaque, below some Japanese text which we guess says the same:}
The monument to those who came from Japan to UCL in 1863 and 1865, erected with the aid of generous donations from the Anglo-Japanese Friendship Society and the Japan-British Culture Memorial Club was unveiled by His Excellency Mr Hiroshi Kitamura, Ambassador of Japan, on 2nd September 1993.

These were the pioneers who came to UCL in 1863 and 1865 and returned to lay the foundations of modern Japan.

{The north face carries Japanese text and we have read that it contains the Haiku:}

The monument is made of fine-grained gabbro, polished to a black, mirror-like surface, and sits on contrasting pale matt granite. Unveiled on the 58th anniversary of the signing of Japan's surrender document, ending WW2. VJ Day actually has a number of dates on which it is commemorated.

UCL was the university chosen because it was the only English one that was open to all races, religions, classes and political opinions.

More information about this educational event at UCL News and at Issuu.

This monument was installed here in 1993 and we first collected it in 2012.  Our main photo shows it in 2022, in the Japanese Garden which had recently had a new sculpture, Fragments of Memory, installed. The space is called the 'Japanese Garden' but, while it does have cherry trees, it's a space dedicated to Japan rather than a garden in the style known as Japanese.

This section lists the subjects commemorated on the memorial on this page:
Japanese students at UCL

This section lists the subjects who helped to create/erect the memorial on this page:
Japanese students at UCL

Erected the year after Davidson's death, about 18 months after his resignatio...