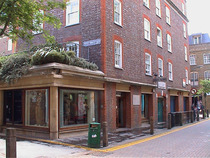 From Seven Dials Estate Conserevation Area Statement "The prevailing scale of the street is broken at the south eastern junction of Neal Street and Shorts Gardens by Nottingham House a neo-Georgian block of flats designed in 1925. The original five storey block and the rear yard and mission hall were converted in 1997/8 into a mixed use development with shops at ground floor level, an additional floor of flats and a new mission hall. The development improved the street scene, particularly to Nottingham Court. Designed by the Peabody Design Group the scheme received a Civic Trust Award 2000."

This section lists the subjects commemorated on the memorial on this page:
Nottingham House

Society for Improving the Conditions of the Labouring Classes

Founded as the Labourer's Friend Society by Lord Shaftesbury intending to imp...

This section lists the subjects who helped to create/erect the memorial on this page:
Nottingham House

{Small modern plaque under the memorial:}This memorial was erected within the...