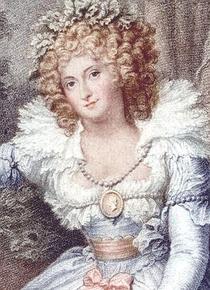 Mistress/wife of George, Prince of Wales, King George IV to be. Her first husband, Edward Weld, died three months after the wedding, falling off his horse, and before he had signed his new will, thus leaving his widow unprovided for. She married Mr Fitzherbert three years later and three years after that he died, but this time the young widow successfully inherited. Thus enabled to move in high society she met the Prince of Wales and married him on 15 December 1785, in her Mayfair home in Park Street. The Prince did not obtain permission from his father King George III so the marriage, carried out by Robert Burt, was not considered valid. However if he had gained permission, and the wedding had been valid he would have been disqualified from inheriting the throne since Mrs F was a Catholic. So it seems the couple chose for her not to become queen rather than for him not to become king.

His relationship with Mrs F did not stop the Prince having an affair with Lady Jersey or, in 1795, marrying, legally this time, Caroline of Brunswick (for her money).

This section lists the memorials where the subject on this page is commemorated:
Mrs Fitzherbert