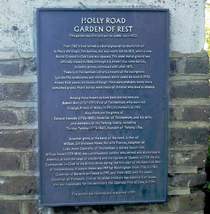 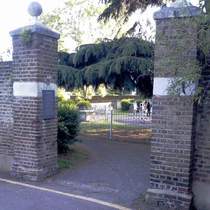 Holly Road Garden of rest
This garden was first laid out for public use in 1953.

From 1782 it had served as a burial ground for the Parish of St Mary the Virgin, Twickenham, but was nearly full by 1835, when a new Burial Ground in Oak Lane was opened. This older burial ground was officially closed in 1868, although it is known that some burials, in family graves, continued until after 1875.
There is, in Twickenham Library, a record of the inscriptions on the 196 tombstones and monuments which could be read in 1930. About 450 names are listed, although there were probably many more unmarked graves. Many burials were those of children who died in infancy.

Another grave, at the bend of the road, is that of William, 5th Viscount Howe. His wife Frances, daughter of Lady Anne Connolly, of Twickenham is buried beside him. William Howe (1729 - 1814) was a professional soldier who served with distinction in America, at both the siege of Louisburg and the capture of Quebec in 1759. He was Commander-in-Chief of the British Army during the first part of the American War of Independence. Viscount Howe was MP for Nottingham from 1758 to 1780, Governor of Berwick-on-Tweed in 1795, and from 1805 until his death, Governor of Plymouth. One of his older brothers was Admiral Earl Howe, who was responsible for the sea victory the Glorious First of June, in 1794.

The garden was restored and re-planned in 1991.

This section lists the subjects commemorated on the memorial on this page:
Garden of rest