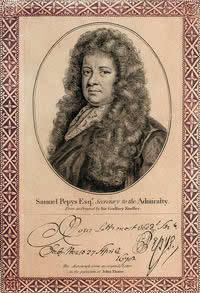 Diarist and Secretary of the Admiralty. Born Salisbury Court, where his father ran a tailoring business. The house backed onto St Brides church. Highly regarded administrator of the navy. Served Cromwell, King Charles II, King James II, but resigned rather than serve King William III. Pepys was on the ship commanded by Montagu that brought Charles II back from exile at the Restoration. On the governing board of Christ's Hospital with a special interest in the Royal Mathematical School.

In 1659, through his patron, Montague, he got his first job in the Navy Board and he moved into the house that came with the job, in Seething Lane (plaque) where he stayed until c.1672. He was very house-proud and enjoyed improving it. The book cases he had built there are the first-known purpose-built bookcases in England. Having survived the Great Fire of London Seething Lane was burnt down in January 1673 and Pepys lived in lodgings just around the corner in Mark Lane. In January the following year he moved to rooms above the Admiralty quarters in Derby House in Cannon Row (just north of Westminster tube station).

In 1679, on release from a brief spell in the Tower, Pepys went to stay with his trusted assistant and friend William Hewer in York Buildings, Buckingham Street (plaque) where he had his own set of rooms. In 1685 Pepys was joined there by his mistress of 14 years, Mary Skinner, who was now often given the respect normally reserved for a wife. Hewer moved out and Pepys had the Admiralty Office moved from Derby House to Buckingham Street. The houses involved were no 12 and no 14.  In 1680, rather than serve King William he resigned from the Admiralty and refused to move out of his home so the Admiralty Office was moved out instead.

Died Clapham in Will Hewer's house where Pepys had moved in 1701, together with his library. This house, demolished c. 1760, is thought to have been on the north side of the common, near what is now Victoria Road. Buried at St Olave's.

Pepys invested in the slave trading Royal Africa Company and was a slave trade enabler through his job at the Naval Office.

We highly recommend 'Samuel Pepys: the Unequalled Self' by Claire Tomalin.

This section lists the memorials where the subject on this page is commemorated:
Samuel Pepys

Site of the Navy Office in which Samuel Pepys lived and worked. Destroyed by...

This section lists the memorials created by the subject on this page:
Samuel Pepys

Essayist. Initially wanted to be a philosopher, then tried painting and then...

Historian. Born into a family of gun and rifle manufacturers, he was a prolif...