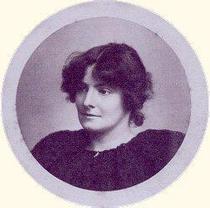 Author and poet. Wrote approximately 40 books for children including 'The Railway Children'. Born at 38 Lower Kensington Lane. She married the journalist and politician, Hubert Bland in 1880, but unknown to her he was still sharing his time with his mistress. With another woman a long-lasting menage-a-trois was formed which had the benefit of providing childcare so that Nesbit could work.

Nesbit and Bland were founding members of the Fabian Society, also naming their son Fabian. Her best known book 'The Railway Children' was published in 1906. 1899-1920 lived at Well Hall.

Three years a widow, on 17 February 1917 she married Tommy Tucker in Woolwich. Together they lived as tenants at Well Hall House, Well Hall Road, Eltham until they moved to to house called 'Crowlink' in Friston, East Sussex. Around 1921 they again moved, to 'The Long Boat', Jesson, New Romney, Kent, where she died from lung cancer. (Jesson was renamed as St Mary's Bay on 12 October 1935).

This section lists the memorials where the subject on this page is commemorated:
Edith Nesbit

This entry has kindly been written for us by Franklin Bishop, expert on Polid...