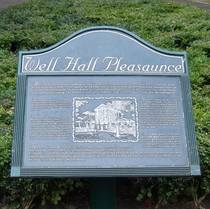 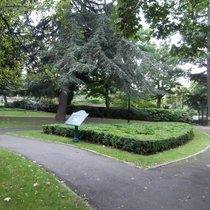 {Surrounding a picture of Well Hall House:}
Well Hall Pleasaunce
An 18th century house standing on this site before its demolition in 1931 was for 23 years the home of Edith Nesbit (1858 - 1924), author of The Railway Children. During her somewhat unusual married life here with husband Hubert Bland, a founder member of the Fabian Society, she wrote many other books including The Phoenix and the Carpet, Five Children and It and the Wouldbegoods.

Before Edith Nesbit took up residence here in 1899, there were other notable occupiers of this imposing three storey house.

The famous clock maker, John Arnold, lived here from 1779 to 1799, seeking an answer to longitude, and the Rev. Charles Fryer, vicar of St John's church at Eltham in the 1840s. The house was used as the boarding section of Well Hall School in the 1880s and their bell can still be seen on the nearby Tudor Barn.

However, Edith Nesbit, with her magic touch of writing children's stories which still live on today in television and film adaptations, is the name now most associated with Well Hall House. She loved living here in this part of South East London and especially enjoyed punting on the moat whilst entertaining her many literary friends, George Bernard Shaw and H.G. Wells among them.

In 1915 and 1916 the grounds were used for garden parties, held to raise funds for The Pioneer Women Campaigners (connected with the Woolwich Labour Party).

Hubert died at Well Hall in 1914. Three years later Edith married marine engineer Tommy Tucker known as 'Skipper', and in 1922 left Eltham for Jesson St. Mary, near Dymchurch Kent, where they had enjoyed numerous holidays exploring the countryside. It was here in 1924 that Edith died; she lies at rest at St. Mary-in-the-Marsh Church, Romney Marsh, Kent.

Jenny Agutter who played Roberta 'Bobbie' Waterbury in the 1970 film of The Railway Children, took part in the unveiling of the plaque.

This section lists the subjects commemorated on the memorial on this page:
Well Hall Pleasaunce

Founded in 1884. Their website states "The Fabian Society is the UK's only me...

The plaque capitalises this as if it was a formal group but we can find no re...

Watchmaker and inventor. Probably born in Bodmin, Cornwall (his birth year is...

Journalist and socialist. Born at 22 Wood Street, Woolwich. He married the au...

This section lists the subjects who helped to create/erect the memorial on this page:
Well Hall Pleasaunce

Founded by Nicholas Reed. It aims to celebrate the life and work of the autho...

Sutton HouseThis building was given to the National Trust by W. A. Robertson ...