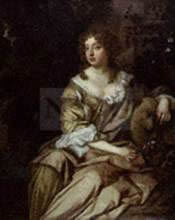 Eleanor Gwyn, Gwynn, Gwynne, whatever. Born Hereford. Rumoured to have lived at Lauderdale House as the mistress of Charles II, where she dangled her first-born from a window to scare the King into giving the baby a title, which he duly did - the Earl of Burford. The affair with the king started in about 1668 and they must have remained on good terms since on his death in 1685 Charles apparently said "Let not poor Nelly starve".  Nell died in her Pall Mall house.

At the height of the anti-Catholic sentiment, with a king known to be friendly towards Catholics, Gwynn is said to have won popularity by contrasting herself with the king's other mistress, Louise De Keroualle, declaring "I am the Protestant whore".

2022: We were contacted by Jennifer Craig telling us that in her family there is the belief that an ancestor, Charles  Gerrelli, who was born in Italy and died in Lambeth, was a stonemason/sculptor who came here to work for a Victoria and Albert exhibition (the 1851 Great Exhibition?) and produced a statue of Nell Gwynn that is in Highland (Highgate?) cemetery. Our genealogy consultant, Andrew Behan, has investigated this family and found a father, Charles, and two sons, Edward and Thomas, who, between them, sort of match the family story, with the occupations: moulder, plasterer, modeller & figure maker, being very interesting.  However we have found no link with the Great Exhibition, Highgate Cemetery or Nell Gwynne, which doesn't mean these links don't exist.

This section lists the memorials where the subject on this page is commemorated:
Nell Gwynne

Isabella I of Castile

Queen of Castile and León. Married to Ferdinand. Together they financed Chris...