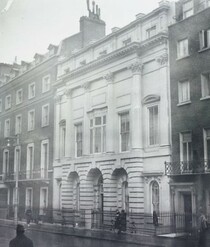 The London home of the Earl and Countess of Strathmore from 1920. The house from which their daughter married the Duke of York (the future King George VI) and the house to which the couple moved just a few weeks before the birth of their first child, the future Queen Elizabeth II, in April 1926. Later that year the small family moved to a larger house, 145 Piccadilly - see the Byron statue for more information about that house.

Demolished in 1937, along with 20 neighbouring houses in Bruton Street and around the corner into Berkeley Square. Replaced with Berkeley Square House "built in 1938 by Gordon Jeeves and Hector O. Hamilton and was considered Europe's largest office block and one of London's first major reinforced concrete buildings".

The photo shows the house in 1926. The house was opposite numbers 23 and 24, which remain.

The BBC have a very good page on this house and its history.

This section lists the memorials where the subject on this page is commemorated:
17 Bruton Street

On this site at 17 Bruton Street stood the townhouse of the Earl of Strathmor...