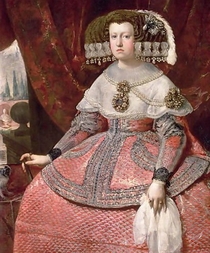 Infanta of Spain, daughter of King Phillip III. She was considered as a possible wife for Charles, Prince of Wales, (The future King Charles I) which became known as the 'Spanish Match'. In 1623 Charles accompanied by Buckingham, travelled to Madrid to negotiate the terms.

The arrangement however came to nought because of religious differences. She eventually married King Ferdinand of Hungary and Bohemia (1608-57), who in due course was elected King of the Romans, which made her Queen of Germany, Queen of Hungary and Holy Roman Empress.

This section lists the memorials where the subject on this page is commemorated:
Maria Anna of Spain

Princess and saint.  Born either in the castle of Sárospatak, or in Pozsony, ...