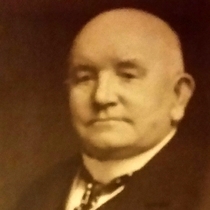 Shopkeeper and philanthropist. Born Camberwell. Aged 17 he and his brother Thomas, left their home in Newington Green and began work in London as errand boys in a drapers. In 1870 he opened a store in Stratford, J. R. Roberts Ltd, which was initially a drapers and furniture shop. It eventually became a full department store at 78-102 Broadway Stratford, the so-called equivalent of Harrods in East London. At its height it employed 500 members of staff.

1882 he bought Salway House as his home. He sold the business in 1894 which enabled him thereafter to live the life of a country gentleman and philanthropist. Knighted in 1911. His philanthropy included, as well as the Memorial Hall, the Jubilee Hospital Woodford (demolished), and the old Union/Wesleyan Church in the High Road which he converted to a working man's club, both in 1904.

The department store closed in 1954 and the building was sold to London Co-operative Society. Demolished in 1957–62, a modern long low building now (2019) occupies the site (Wilkinsons and Poundstretcher).

Much of this information comes from the South Woodford Village Gazette and the Washington Post of 22 January 1911.

The Roberts household were in the news, and not in a good way, when the Essex Newsman Sat 13 Nov 1909 reported that Samuel Willingale, head gardener, was found lying dead in a tank of water in a greenhouse at Salway House.

The 18th century Salway House was demolished in 1932 and the site is now occupied by Salway Evangelical Church. Waltham Forest hold an 1890 photo of Salway House but give the address as High Road Leyton. Seems likely this is actually the house in Woodford Green.

This section lists the memorials where the subject on this page is commemorated:
John Reynolds Roberts

This section lists the memorials created by the subject on this page:
John Reynolds Roberts

This building was erected in the coronation year of His Majesty King Edward V...

Newspaper proprietor and campaigner. Born in Norwood. He became owner and edi...

Pubs History says: "This pub was called the Goat until 1725 when the name was...