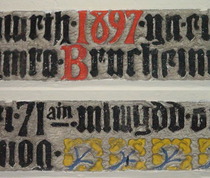 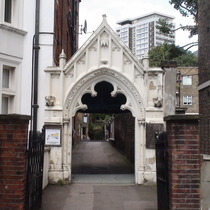 {The Welsh translates as:}
To the glory of God and in memory of Howell Powell Edwards
who died on the 11th of March 1897 in his 71st year of age.
Oxford Council Member and Canon of Llandaff Cathedral.
A gentleman and a Welshman from Brecon.

Our thanks, as ever, to our Welsh consultant, David Hopkins, for providing the transcription (Welsh in Gothic script defeated us) and the translation. Our photos left him slightly puzzled about the last line so he visited the site and writes: “Someone has touched up the letters with black paint at some point, but they've misinterpreted two of the letters (the last two ’y’s) on the bottom line.  The tails of these two letters are very near the bottom where the stone has crumbled away and they have been incorrectly repainted as an 'o' and an 'n'".  We just hope that the next time the painters are called in they refer to this page and correct the error.

The lettering is in a long narrow band running along two sides of the porch. It's lovely but doesn't photograph well so we have put photos of two sections together in our close-up image.

This archway leads to St David’s Welsh Church, designed by C. Evans Vaughan (who also built Finsbury Town Hall) in 1896.  It is now used by a bilingual French School and no longer operates as a church.

We found a long, repetitive report on the church, where there are a few photos.  The only reference we could find to the arch is “The church is accessed through an impressive if slightly overblown Gothic whitewashed stone lych-gate via a long passage.  There are Welsh inscriptions in Gothic lettering along the eaves inside the lych-gate, which has a hipped roof.”  The report is uncertain but suggests the arch is also by C. Evans Vaughan, and, in 2011, it was not listed.

When we first found this arch in the Summer of 2014 it was in a parlous state but the good news is that on our second visit it had just been given a coat of paint and was looking much better, but still behind scaffolding so we decided to keep the Summer photo after all.

This section lists the subjects commemorated on the memorial on this page:
Howell Powell Edwards

{On a nearby plaque:}Section of the Berlin Wall'Change Your Life' by the graf...

Our 'inscription' comes from the modern information panel just outside our ph...