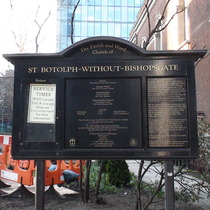 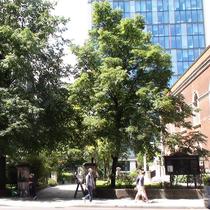 Christian worship has been offered on this site since Roman times. The Church is first mentioned as ‘Sancti Botolfi extra Bishopsgate’ in 1212. The building was repaired in 1671 and partially reconstructed in 1666. It survived the Great Fire of 1666, but by the early c18 had to be demolished. The present church, the fourth on the site, was completed in 1729 to the designs of James Gold, under the supervision of George Dance. Its most modern feature is the stained glass window commissioned by the Worshipful Company of Bowyers to mark the recent restoration carried out in 1993-4.
Over the centuries, many famous Londoners have been associated with St Botolph’s, including Sir William Allen, Lord Mayor 1571-2, who repaired the church at his own expense; Edward Alleyn, founder of Dulwich College, who was baptised here in 1566; Sir Paul Pindar, James I’s Ambassador to Turkey; and John Keats, baptised here in 1795.
The church contains the regimental memorial chapel of the Honourable Artillery Company and the Book of Remembrance of the London Rifle Brigade. The memorial cross in the churchyard is believed to be the first memorial of the Great War (1914-1918) to be set up in London, erected in 1916 after the Battle of Jutland.

{From another information board:}
This garden combines the churchyard of St Botolph without Bishopsgate and land donated by the Common Council in 1760. The current church dates from 1725-6, and escaped with little damage during the Second World War, losing only the west window.

The church has two information boards, both of a standard design, which we would not normally collect but this one has some good history. However the board credits George Dance as supervising architect of this building, in 1729 when GD the Elder would have been 33, surely too young for such a role. As suggested by ‘London Past and Present: Its History, Associations, and Traditions’ by Henry Benjamin Wheatley & Peter Cunningham,iIt is more likely to have been his father Giles Dance, born 1670 and so a respectable 58 at the time.

The piers on either side of the path look like gate-posts but there's no evidence of any gates ever having been attached. Each of the piers has a drinking fountain facing the road and an inscription facing the other pier. These near identical piers can be seen in our picture: one, just in front of the blond walking out of shot to the left and the other, behind the man at the centre. The shaft of the memorial cross is just visible above the heads of the couple walking to the right. The large black object to the right is the main modern information board. The other is behind the central pier. The inscriptions on the piers are not visually very interesting so we have provided other views of the pillars instead.

This section lists the subjects commemorated on the memorial on this page:
St Botolph's information board

First mentioned as ‘Sancti Botolfi extra Bishopsgate’ in 1212. Repaired in 16...

Began as a Volunteer Rifle Corps with the title London Rifle Volunteer Brigad...

This section lists the other memorials at the same location as the memorial on this page:
St Botolph's information board