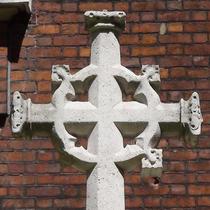 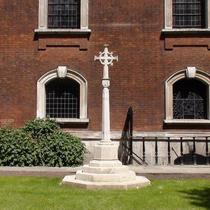 {On four alternating faces of the octagonal plinth, reading clockwise from the south face:}

In memoriam, officers and men of the Honourable Artillery Company who died in the Great War.
August 4, 1916.

Unlike the majority of war memorials this was erected while the war continued. Hell-fire corner knows of a printed Order of Service in the HAC Archives entitled 'Second Anniversary of the Great War, August 4th, 1916. Unveiling of Memorial Cross to Lord Kitchener by the Lord Mayor of London in the presence of the Hon. Artillery Company. Address by the Lord Bishop of Stepney'.

London's first memorial to WW1. The HAC grounds and HQ are reasonably nearby just north of the Archer site.

The BBC page that reports the centenary re-dedication seems to think the inscription honours all 640+ men who were lost on the HMS Hampshire, not just Kitchener, even though the inscription does not even mention the ship.

This section lists the subjects commemorated on the memorial on this page:
WW1 cross at St Botolph's

Dead of Bishopsgate in WW1

In memory of Arnold and Verna Rosen, good citizens and Fabians.

{Plaque to the left of the window:}Light in the Darkness 2000 by Julian Stock...

The pediment is at about ground level, between the window and the pavement ra...