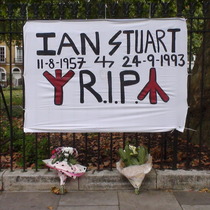 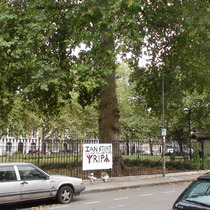 We don't know what the red symbols mean (born and died?) but we do recognise the symbol between the dates.

Stephen Brasher wrote to say “the red symbols are Norse or Anglo Saxon runes - obviously linked to his fascist politics”. He thinks the upwards one might mean protection.  We briefly Googled, found “elk” and “chalice” and then decided life’s too short.

To be clear, we chose to add this memorial to our site not because we approve of Ian Stuart's politics but because the recurring memorial is interesting. It's the speed of the local community's response that we approve of.

WC2, Argyle Square, middle of the west side of the square

This memorial was erected on 24 September 2014, exactly 21 years since Stuart died, and it was removed by the local community the next day. We believe he lived in one of the houses in the terrace opposite this memorial. 2015, September: Another similar banner was erected on the 24th, but this time without the inflammatory symbol, and it was destroyed by fire on the 25th.

This section lists the subjects commemorated on the memorial on this page:
Ian Stuart

{On a modern sign:}These millstones were found during the excavation of the o...