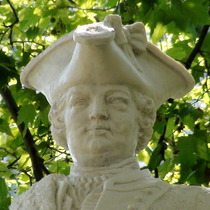 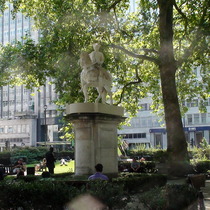 {On the side of the plinth:}
William Duke of Cumberland, born April 15th 1721, died 31 Octob. 1765. This equestrian statue was erected by Lieutenant General William Strode in gratitude for his private kindness, in honor to his publick virtue, November the 4 Anno Domini 1770.

The original was in lead and gilt and was, apparently, London's first outdoor statue of a soldier.  The site was originally intended for a statue of Queen Anne but that never materialised.

From an info board in the square: "The statue of the Duke of Cumberland, shown on a prancing charger, was erected in 1770 and removed in 1868. Today only the stone base, complete with its inscription, remains." "Where is the statue now?" you ask - it was melted down so gone for good.

June 2012 Londonist told us that the artist Meekyoung Shin re-installed the statue, in soap, so we popped along and took some snaps before it dissolved away, or is removed as planned in July 2013. The Londonphile tells us that the soap is vegetable-based and is supported on an internal armature attached to the base, and Ornamental Passions tells us it is funded by Lush who presumably provided the soap. 26 August - statue still pristine with no sign of dissolve, probably due to there having been very little rain since it was installed. 16 November - we've not managed to get back but the Londonphile has and reports not much change. Rather disappointing, really. 24 June the Londonphile reports missing limbs! The remnants were finally removed in 2016.

2021: This statue was removed due to the change in attitude to Cumberland's actions at Culloden. It's interesting to compare this with the recent calls for the removal of statues to slave-traders, and the official reluctance to do as asked, claiming that to do so would be to "erase history".

This section lists the subjects commemorated on the memorial on this page:
William Duke of Cumberland

This section lists the subjects who helped to create/erect the memorial on this page:
William Duke of Cumberland

'The history and antiquities of London, Westminster, Southwark, and other par...

The ride on the Hogwarts Express starts from King's Cross railway station pla...