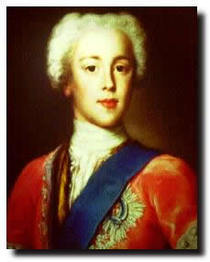 Born Rome of a rich Polish mother. Grandson of King James II who, being Catholic, was driven out of Britain, thus setting the scene for the Jacobite uprisings in support of first James, then his son, "The Old Pretender" and then Charles being returned to the throne. ("Jacobite" being derived from the Latin for James, Jacobus.)

Charles invaded and with support from Scotland was doing remarkably well until the battle of Culloden, after which he fled and went into hiding (pause for a rendition of "Over the Sea to Skye" and a cheer for Flora MacDonald).

He escaped to France intending to mount another campaign but all he managed was to visit London in disguise in 1750, when he stayed at a house in Essex Street.

From British History we learn:
It was in Essex Street that Dr. King, as we learn from his "Anecdotes of His Own Time," was privately presented by Lady Primrose, "in her dressing-room," to Prince Charles Edward Stuart, "the Young Pretender," during his short, secret, and stolen visit to London, between the 5th and the 11th of September, 1750.

Charles died in Rome and is buried at a church in Frascatti.

This section lists the memorials where the subject on this page is commemorated:
Prince Charles Edward Stuart (Bonnie Prince Charlie)

Mother of Henry VII.  Born Bedfordshire.   As a Tudor matriarch she was impor...