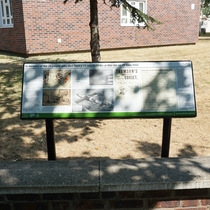 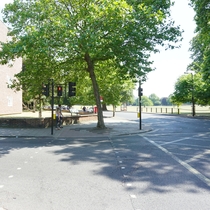 {Main panel:}
At 8.50 am on Thursday 22 June 1944 a V1 missile or 'Doodlebug' hit a factory on this site killing 24 people, mostly teenage girls.
The factory building comprised of (sic) three large Georgian houses converted into a corset factory. The workers in this factory were making silk parachutes for the war effort.
Most of the fatalities were sheltering in a bomb shelter in the rear garden. When the factory took a direct hit it collapsed upon the shelter, trapping the people taking cover there. Initially the buried survivors could be heard singing, but by the time they were dug out all had perished.

London's summer of 1944 became known as the 'Doodlebug Summer' when, starting on 13 June, a series of new missiles were launched towards the capital; the Germans last desperate and ill-fated effort to turn the tide of the Second World War.

These new weapons were pilotless flying bombs, forerunners of today's self-guided cruise missiles. A total of of 9,521 V1's were aimed at the south east of England, largely at London, where the density of Europe's largest city guaranteed maximum death, injury and destruction.

Peckham and Nunhead really suffered in these attacks: 28 of the V1 missiles fell in SE15 killing 126 people, wounding many others and blowing up hundreds of houses. These terrible machines were complemented by the Nazi's other 'V' 'vengeance' weapon, the V2, which was an even heavier, supersonic ballistic missile. These began to arrive later in the autumn of 1944 killing a further 27 people in Peckham alone, as well as hundreds across London. A mile to the east, at New Cross Gate, 168 people were killed when a V2 rocket struck a Woolworth and Co-op shop at mid-day.

Written and designed by Benedict O'Looney Architects with thanks to Chris Scales and Dr Peter Frost, Chairman of the Peckham Society for historical research.
www.southwark.gov.uk

{Other panels give information about the factory, the mechanism of the V1 and locations of other missile strikes in the area. There is also a list of the 24 victims - see commemorated subjects:}

The memorial can be seen in our photo, between the two pedestrians and the tree.

2020: Via Facebook Peter Hill provided some first-hand information about this bomb: "We lived at 5 Nunhead Lane opposite the factory. All our windows & doors were blown out when the first bomb dropped on the Rye about 7.30. My grandfather & grandmother were in the hallway clearing up. I was just in the shelter & my mother was outside boiling a kettle on a Primus. When my grandfather heard the bomb cut out overhead he rushed my grandmother down into the shelter grazing her leg. He had just shut the door when the bomb exploded. My aunt, who had been to phone my uncle to come and help clear up from the first one, was just outside when the second one landed & she was buried in what had been our cellar. She was rescued alive with only a broken collarbone. I was 7 years old at the time." Thank you Peter, that's a vivid account.

This section lists the subjects commemorated on the memorial on this page:
Nunhead Lane V1 rocket

The rocket landed on the Woolworth's building at 12.44pm It was a sunny Satur...

WWII attack on a factory which killed 24 people. The memorial gives details o...

This section lists the subjects who helped to create/erect the memorial on this page:
Nunhead Lane V1 rocket

A society that exists to encourage interest in, and to care for the environme...

Firm of architects. They have worked on the Peckham and Croydon mosques and t...

Chairman of the Peckham Society.

Up and down the City Road In and out the Eagle That's the way the money goes ...