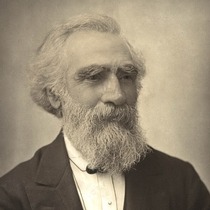 Credit for this entry to:
Dean Evans, Sebastian Bulmer

Political and social reformer, politician, peace activist, and anti-slavery campaigner he became one of the most successful newspaper proprietors of his time. Born in a small Cornish village and educated at the local dame school, he had an ambition “to be useful”; an ambition that remained with him throughout his life. Early attempts at publishing led to bankruptcy but through hard work he repaid his creditors in full. Disillusioned by Parliament (representing Salisbury 1880-1885) he redistributed the wealth that he had earned by funding the building of more than 70 public buildings; libraries, hospitals, convalescent homes, schools, art galleries and museums; to help those he considered he had a responsibility to assist. He twice turned down a Knighthood and died at home, 51 Netherhall Gardens.

A Few Footprints quotes Edwards' autobiography, of the same name, published in 1906 : "To place drinking-water within reach of many of the poorest, I have, in co-operation with the Metropolitan Drinking Fountains Association and the Metropolitan Public Gardens Association, placed drinking-fountains in Victoria Park; Stalbridge Common, Hackney; The Broadway, Hammersmith; Edgware Road, Kilburn; the Public Gardens, Woolwich; Duncan Terrace, Islington; Christchurch, Blackfriars; Hoxton Square; Leyton Square, Camberwell; Rotherhithe Street, Bermondsey; and Hackney Road Ground, Shoreditch In constructing these fountains the dog, that faithful friend of man, and destined so often to be cut up alive to satisfy deplorable vivisectionist curiosity, has not been forgotten."

Additionally: Albion Square, Haggerston, E8 - Diane Burstein told us there's a JPE fountain there, and indeed there is - we've now published it. But note, this fountain was erected in 1910, after the autobiography was published and so it brings the total number up to 12, of which we have found 3.

Our colleague, Sebastian Bulmer, has done a thorough job researching JPE drinking fountains and has visited all the sites. Here, below, are his findings. In summary: of the 13 only 3 have survived, the 3 that we have collected.  It's quite possible that others were erected, especially 1901-11, that we have yet to hear about.

Sebastian writes: “The hardest to pin down was Stalbridge Common, but I would like to suggest that this is the memorial fountain to Henry Fawcett that used to be at Stonebridge Common/Gardens (listed at the very top of p21 in the Return of Outdoor Memorials). If so, that would mean another memorial to Henry Fawcett has been lost.”

Hammersmith Broadway, W6 - Andrew Behan confirms that this fountain no longer exists. Richard Passmore Edwards Memorial Fountain shows that it was unveiled in 1895, removed in 1910 and re-erected at Ravenscourt Park directly in front of the Ravenscourt Library in 1912. The library was damaged by bombs in 1941 and demolished. It is assumed the fountain went the same way.

Edgware Road Kilburn, NW6 – Images of London (2022: failing link) have a 1912 photo showing a fountain at St Pauls Kilburn Square. The image is small but the fountain seems to be of the basin type - not much favoured by Passmore Edwards elsewhere. It seems to be on the pavement opposite the church. From Pinterest: "The top photo shows St Paul's Church on Kilburn Square which was rebuilt in the 1830s to replace a chapel that was founded in the 1820s. The church was demolished in the 1930s and the houses surrounding it were demolished in the 1960s to make way for the buildings shown in the bottom photo." The modern buildings shown there are those on the west side of Kilburn High Road between Victoria Road and Brondesbury Road. We went and searched and could find no drinking fountain anywhere in the vicinity. Of course, we don’t know that the fountain shown in the 1912 image is a Passmore Edwards fountain but this information seems to be confirmation that the Edgware Road, Kilburn fountain is lost.

All Saints Churchyard, Poplar - Sebastian is still working on this one.

Sebastian finishes optimistically: “It is not unheard of for a drinking fountain to have been moved and subsequently forgotten about. My hope is that some of JPE's drinking fountains are patiently waiting to be rediscovered in some quite corner of London, but it's a long shot!”

This section lists the memorials where the subject on this page is commemorated:
John Passmore Edwards

This section lists the memorials created by the subject on this page:
John Passmore Edwards